PONANT Science: a unique in the world commitment

PONANT’s involvement in the study of the regions it explores contributes to improve scientists’ knowledge of these ecosystems.

Last September, PONANT inaugurated Le Commandant Charcot, the first hybrid electric polar exploration vessel powered by liquefied natural gas and the first cruise ship to welcome on board teams of scientists with work spaces entirely dedicated to them: a remarkable advance in terms of navigation and tools made available to the international scientific community.

A robust and lasting commitment to academic science

The resources provided by Le Commandant Charcot are an extension to actions already taken by PONANT to facilitate research. Analysis of coral reefs for the University of Oxford, recording cetacean sounds for bio-acoustician Michel André or observing the behaviour of humpback whales with the NGO Conservation International, are just a few examples.

For us, putting our technical and human resources at the service of science to create opportunities for research is a logical extension to raising our guests’ awareness of issues related to protecting the planet. With Le Commandant Charcot, and in the heritage of her eponymous explorer, our commitment to science is officially anchored as an integral part of our identity 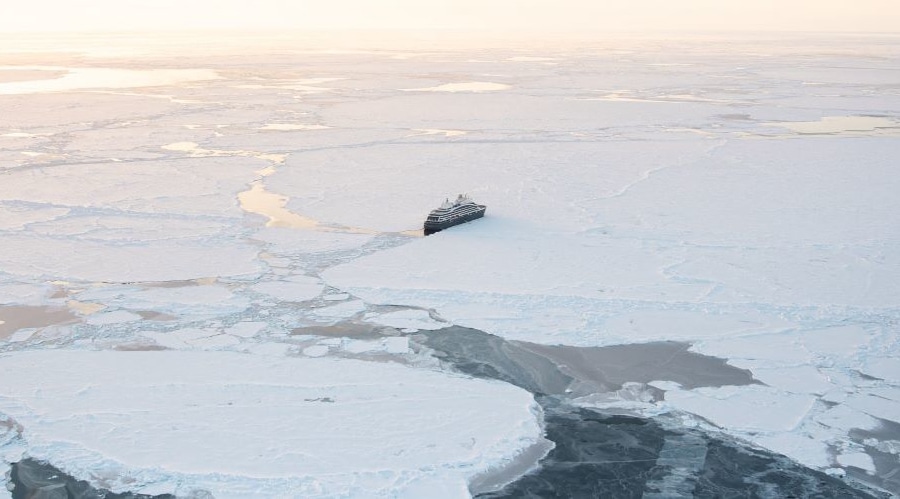 The unique features of Le Commandant Charcot allow researchers working in the polar regions, such as biologists, geographers, oceanographers, climatologists or ethnologists, to repeatedly access unexplored or rarely studied places, and thus extend the duration of polar campaigns. The ship offers science facilities with two research laboratories (including one with openings on to the sea) as well as autonomous measuring instruments.

We were able to immerse instruments to obtain data on temperatures, salinity and water properties from the surface to the depths. We have also deployed instruments that remain in the Arctic collecting data in the years to come. Le Commandant Charcot offers incredible opportunities for cutting-edge science.

Camille Lique, , oceanographer at the IFREMER (French Research Institute for Exploitation of the Sea), present on board during the first expedition of Le Commandant Charcot to the North Pole.

Le Commandant Charcot offers researchers the opportunity to embark for the polar regions.

To find out more about the calls for projects, contact us at

Alongside the academic science project, PONANT commits to offering its guests an opportunity to take part in the many projects led on board. Workshops and scientific protocols are animated by the naturalist experts on board, enabling the guests to get actively involved and feel they are making a tangible contribution to science.

Data collected for projects like the marine species census, cloud cover observations, or phytoplankton sampling are all being fed into programmes such as Happywhale, Globe Clouds, FjordPhyto and Seabird Surveys. The scientists on board also give lectures on the concerns behind their various missions.

In order to deploy these citizen science programmes on board, PONANT has formed a close partnership with The Polar Collective, an association specialising in the coordination and facilitation of citizen science workshops on polar expedition ships.