Imperial and colonial capitals, lush nature and vibrant colours: Vietnam is a portal to a poetic world of land and water. From Ha Long Bay to Ho Chi Minh City, get swept away on a cruise around this dazzling country.

All about cruises Vietnam

Price is per person, based on double occupancy, based on availability, and subject to change at any time. The category of stateroom to which this price applies may no longer be available.

Rice paddies, peaceful canals, legendary bays, colourful markets, impressive temples and pagodas... A cruise to Vietnam provides unparalleled access to the country's breathtaking coastlines and landscapes. Take a moment to peruse our list of unmissable experiences before you drop anchor in Vietnam. 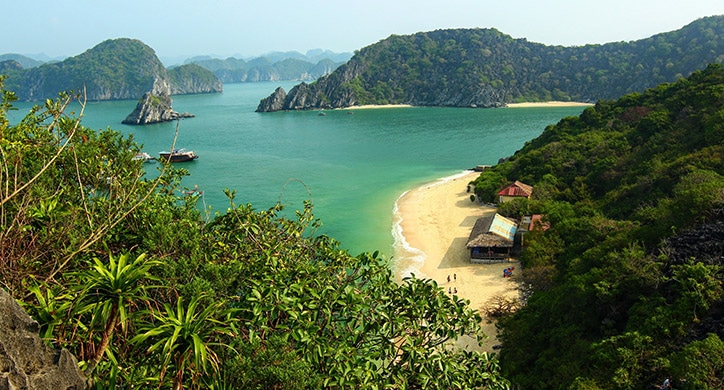 Why are baguettes so popular in Vietnam? How should visitors behave? What is some recommended reading for a trip to Vietnam? This guide holds all the answers to your questions about the Land of the Ascending Dragon!

Rice paddies, peaceful canals, legendary bays, colourful markets, impressive temples and pagodas... A cruise to Vietnam provides unparalleled access to the country's breathtaking coastlines and landscapes. Take a moment to peruse our list of unmissable experiences before you drop anchor in Vietnam. 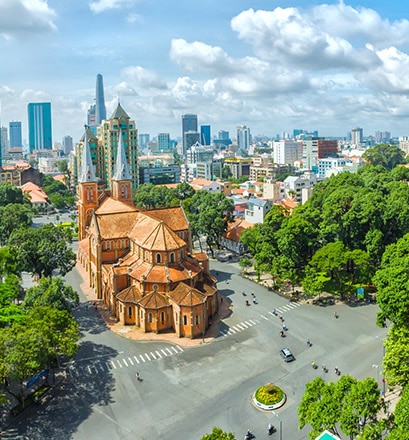 A rapidly developing city, the former Saigon has stayed true to its heritage. The symbol of Vietnam’s independence, it is home to the Reunification Palace. Images of this former presidential palace were shared around the world when a North Vietnamese army tank crashed through its gates on 30 April 1975, ending the conflict. The neoclassical Notre-Dame Cathedral and the colonial Central Post Office are a testament to the city's Western past. Designed in a more typical Vietnamese style, the bustling Jade Emperor Pagoda and the colourful Binh Tay Market are also well worth a visit.

Immerse yourself in the culture of Hanoi

Hanoi is one of the jewels in the Vietnamese crown, scattered with remnants of the French colonial era, traditional monuments, dazzling lakes and historic landmarks. Built 1,500 years ago, the Tran Quoc Pagoda is the oldest in Vietnam. While in Hanoi, visitors should make a stop at the Ho Chi Minh Mausoleum, explore the embassy-lined streets of the former French quarter, or check out the Vietnamese Women's Museum, which pays homage to their elegance through the ages. If you are looking for a pleasant walk, the narrow streets and stalls of the Old Quarter of Hanoi exude a timeless charm, while the Hoan Kiem Lake is a scenic spot in the middle of the city. 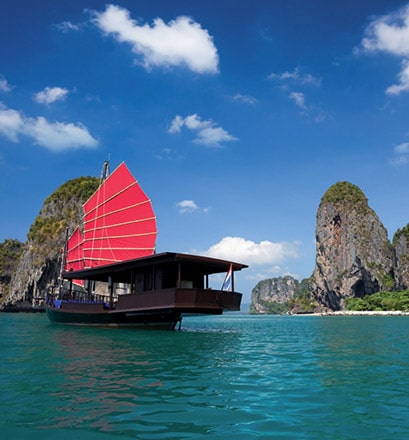 In the Gulf of Tonkin, Ha Long Bay is one of Vietnam's most iconic locations, classified as a UNESCO World Heritage Site since 1994. Its 1,600 islets and verdant limestone pillars rise high above the water, creating breathtaking seascapes. Sailing the 1,500 square kilometres of the bay is the best way to immerse yourself in the stunning scenery: emerald water, floating fishing villages, impressive caves and lush islands.

Recharge your batteries in Nha Trang

A seaside resort on the China Sea, Nha Trang offers the perfect blend of historic landmarks and beaches lined with coconut palms. When you are not lounging by the water, you can take the chance to explore the city on foot or by pedicab. The fishing boats in the port, the Long Son Pagoda, the Dam Market, the Cham towers of Po Nagar—a sacred Hindu site—all reflect the traditional side of Vietnam. 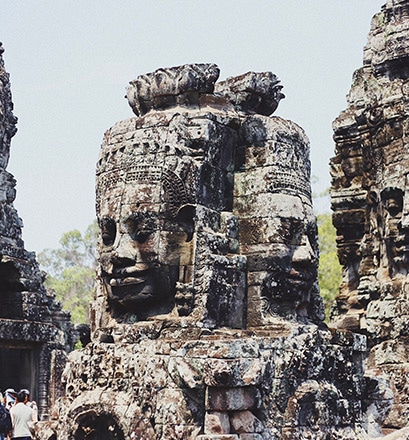 Go further afield to the temples of Angkor, Cambodia

The temples of Angkor create a striking silhouette against the clear blue sky or the setting sun. Around a two-hour flight from Hanoi, the ruins emerge from the forest on the outskirts of Siem Reap city. Listed as a UNESCO World Heritage Site since 1992, the archaeological site embodies the grandeur of the former capital of the Khmer Empire, which lasted from the 9th to the 15th century. At its height, the city had 750,000 residents, and the Angkor Wat temple remains the largest religious complex in Southeast Asia to this day. One of the site's more unusual features, its sophisticated water management network is widely considered one of the wonders of Angkor.

Why are baguettes so popular in Vietnam? How should visitors behave? What is some recommended reading for a trip to Vietnam? This guide holds all the answers to your questions about the Land of the Ascending Dragon!

Dos. Politeness and discretion are the cornerstones of Vietnamese culture. If a quarrel breaks out in public, the angry party is seen as rude and the other party is humiliated.

Don'ts. Visits to temples and pagodas require proper attire, with legs and shoulders covered. You should also remove your shoes.

In Vietnam, bakers make bread very similar to the baguettes found in France. This tradition is a remnant of the French colonial era. Known as banh mi, or "wheat bread", it is actually made using a mixture of wheat flour and rice. The term banh mi can also refer to sandwiches containing Vietnamese sausage, meatballs or chicken, grated carrots, cucumber and coriander, which are served in these baguettes.

If Vietnamese cuisine had to be boiled down to a single dish, it would be pho (pronounced "fuh"). Locals enjoy this hearty and inexpensive soup at any time of the day. Each region has its own version with its own unique flavours, but the base is always the same: beef broth simmered with plenty of spices, such as cloves, ginger and cinnamon, served with rice noodles. One of the most common choices features beef, onions, bean sprouts, cilantro, Thai basil, lime and chilli.

According to Vietnamese legend, dragons, unicorns, turtles and phoenixes are all considered sacred animals. They represent power, knowledge, peace, longevity and elegance, appearing in a wide range of artworks and architecture.

44 years after the end of the Vietnam War, Agent Orange, the powerful herbicide that was dropped on the country's forests, is still wreaking havoc. It has a detrimental effect on the human body, causing birth defects and cancers in many children. For many years, numerous groups have been calling for the US to recognise the damage caused by this defoliant. In 2019, the United States finally launched a clean-up campaign targeting the main sites where the chemicals were stored in the 1960s.

Books. 992. Raymond Depardon and Jean-Claude Guillebaud are on an adventure through Vietnam, like so many other tourists. This duo, however, has been here before. In Return to Vietnam, the photographer and the war correspondent retrace their steps from 20 years earlier. Their bittersweet journey lets them see the country in a whole new light, witnessing the aftermath of the war they left behind.

Film. Where does the life of a little girl placed in an orphanage in Ireland in the 1950s intersect with the story of Vietnam's street children? That child from Dublin grew up to be an adult, but she was haunted by nightmares of a faraway country ravaged by war. She made the journey to Vietnam in 1989 and discovered the plight of thousands of children. For the past 30 years, the Christina Noble Children's Foundation has provided them with care and education and fought against extreme poverty in Vietnam and Mongolia. A film about her story was released in 2014. http://france.cncf.org/

Vietnam is home to 8 UNESCO World Heritage Sites: Ha Long Bay, the Tràng An Scenic Landscape Complex, the central sector of the Imperial Citadel of Thăng Long in Hanoi, Phong Nha-Ke Bang National Park, the Complex of Hue Monuments, the Old Town of Hoi An, the My Son Sanctuary, and the Citadel of the Ho Dynasty.